There are many other organizations in the Hampton Roads area working on projects related to 1619, here are those who have partnered with us to put on the conference and other events.

The Lemon Project is a multifaceted and dynamic attempt to rectify wrongs perpetrated against African Americans by the College through action or inaction. An ongoing endeavor, this program will focus on contributing to and encouraging scholarship on the 300-year relationship between African Americans and the College, and building bridges between the College and Williamsburg and Greater Tidewater area.

Description:  In 2009, after student and faculty resolutions calling for a full investigation of the College’s past, the Board of Visitors acknowledged that the College had “owned and exploited slave labor from its founding to the Civil War; and that it had failed to take a stand against segregation during the Jim Crow Era.” As a result, the Board offered its support for the establishment of The Lemon Project: A Journey of Reconciliation. The Project is named for Lemon, a man who was once enslaved by the College of William & Mary. We cannot know the full dimensions of Lemon’s life or his relationship with the College. In many ways, Lemon stands in the place of the known and unknown African Americans who helped to build, maintain, and move the College forward.

The Lemon Project is generously funded by the Office of the Provost at the College of William & Mary.

American history. No matter how Jamestown emerged as an outpost of the international slave trade, the advent of the African in the early 17th century evokes images of the vast forced migration of African people across the Atlantic to the Americas as well as the entanglement of blacks, whites, and the Native American Indian peoples of the Chesapeake.

Not only does the Middle Passage Project, founded by Dr. Joanne Braxton in 1995, treat the manifestation of the trade in literature, art, and history, it also makes possible the study of a fleeting period in American history when racism had not hardened into ideology and everyday practice. This original perspective inevitably enhances our understanding of the transition a few transplanted Africans like Anthony Johnson made in exercising citizenship rights and becoming the owners of sizable tracts of land.

The Middle Passage Project is multifaceted, with components ranging from research and lectures to curriculum development and workshops for teachers as well as museum educators. The project also features artistic performances. Major accomplishments include Monuments of the Black Atlantic: History, Memory and Politics, an international conference, held at the College of William and Mary in May 2000, the anthology Monuments of the Black Atlantic: Slavery and Memory (Lit Verlag, 2003) and Crossing a Deep River: A Ritual Drama in Three Movements, which has enjoyed staged readings at Harvard, The College of William and Mary, and the 2005 National Black Theatre Festival and Morgan State University.

As a resource, the Middle Passage Project is ideally suited to the development of public programs at museums, schools, libraries, community theaters, historical societies, and other public institutions. At the Yorktown farmstead of the Jamestown-Yorktown Foundation, for example, the Middle Passage Project held a series of free lectures on the following topics: “Teaching the Middle Passage,” “Patterns of Migration from Africa and Europe into 17th Century Virginia,” “The Archaeology of Slavery,” and “The Material Culture of African Diaspora.” Other programs have served Virginia’s eastern shore at the Accomac County Public Library and the historic Kerr House. Our programming also reaches a wide public audience outside the Virginia Commonwealth, including such diverse organizations and institutions as the Association for the Study of Afro-American Life and History, the University of Michigan at Ann Arbor, the Maryland National Capital Park and Planning Commission, the Ohio Historical Society, the Middle Passage Ceremonies and Port Markers Project and the National Paul Laurence Dunbar Project. The College of William and Mary Middle Passage Project works hand in hand with the College’s “Lemon Project: A Journey of Reconciliation” founded in 2009.

Dwelling in communities throughout the southeastern counties of Virginia surrounding the Nottoway River into Tidewater are the present day generation of Nottoway people.

Prior to 1607, several distinct groups of Iroquoian speaking Indigenous people, including the Nottoway, lived in the current Virginia-North Carolina Coastal plain. After the Nottoway were visited by merchant and land speculator Edward Bland in 1650, additional non-Native traders and land seekers began to expand into the territory of the Nottoway which was along a major Indian Trade path.

After the notorious Bacon’s Rebellion in 1677, several Indian Tribes and the newly arrived Colonists signed the oft-referenced Treat of Middle Plantation. The official English copy of the signed Treaty of 1677 shows the Nottoway Tribe’s Chief, referred to as a King by the Colonists, signed separately, just below the signature of the Queen of the Pamunkey.

Later, just after a major battle between the Tuscarora and the Colonists, the Nottoway and the colonial government signed the stand alone Treaty of 1713. The full circumstances leading to the Nottoway Treaty of 1713 cannot be easily compressed into a simple summary.

Eventually, the Nottoway were forced onto a “reserve” of land of approximately 44,000 acres, commonly referred to as the Nottoway Circle & Square reservation. The reservation was located in near the present day towns of Sebrell, Capron and Courtland. Portions of the Nottoway Reservation were in the present day counties of Sussex and Southampton. That reservation land was eventually allocated by Virginia’s government to a small segment of Nottoways, and became taxable non-reserved land. That process also cannot be understood without acquiring a broad base of historical context from multiple sources, and points of view. 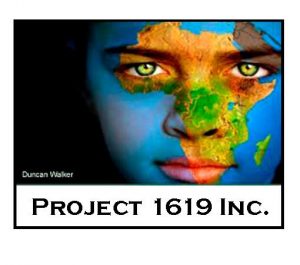 The City of Hampton, Virginia was founded on July 9, 1610 and is the oldest continuous English speaking settlement in America. In 1619 the first documented Africans to arrive on British occupied territory in what would become America landed at Point Comfort in Hampton, Virginia, today’s Fort Monroe.In 2019 the City of Hampton and our Nation will be commemorating the 400th anniversary of their arrival. The Project 1619 Committee, is a national nonprofit organization with a corporate office in Hampton, where the monument campaign will be spearheaded by descendents of the first Africans and the Contraband Slaves.

This grassroots movement is to raise funds for the commission and installation of a National Monument in Hampton. Currently Project 1619 is soliciting proposals and designs for the National Monument from sculptors, artist, and other interested parties.

The monument should be symbolic of the arrival of the first Africans, or their “Triumph Over Slavery”. The monument could be from any medium – bronze, stone, steel, etc. The commission shall be open to national competition as per the attached guidelines. For more information on the project, to submit monument proposal design ideas, or sponsorship opportunities, please contact Mr. Pearson below.

The Sankofa Projects hosts and creates educational and cultural programs and creates Ritual of Remembrance ceremonies which are dedicated to the experience of Africans across the Diaspora. Our mission is to contribute to the academic literature, enhance the current dialogues and create new conversations around history, culture, language, inclusion and resistance so that the contributions which Africans have made globally are accurately reflected in the historical records. The goal of The Sankofa Projects is to serve as a liaison between the grass roots and academic communities and it is our hope that The Sankofa Projects will inspire others to reach back and reclaim their history and culture.

Virginia Foundation For the Humanities

Since its founding in 1974, VFH has produced more than 40,000 humanities programs serving communities large and small throughout Virginia, the nation and the world. In addition to Foundation-directed programs including festivals, publications, CDs, digital initiatives, conferences, teacher institutes, and public radio programs, VFH has contributed to more than 3,000 grant projects and 300 individual and collaborative fellowships.

VFH encourages discovery and connection through the humanities by supporting and producing cultural, civic, local, and global educational programs for broad public audiences. We work with individuals and communities to explore the past, confront current issues, and discover a promising future. We focus our efforts on Community Programs, Scholarship and Digital Initiatives.